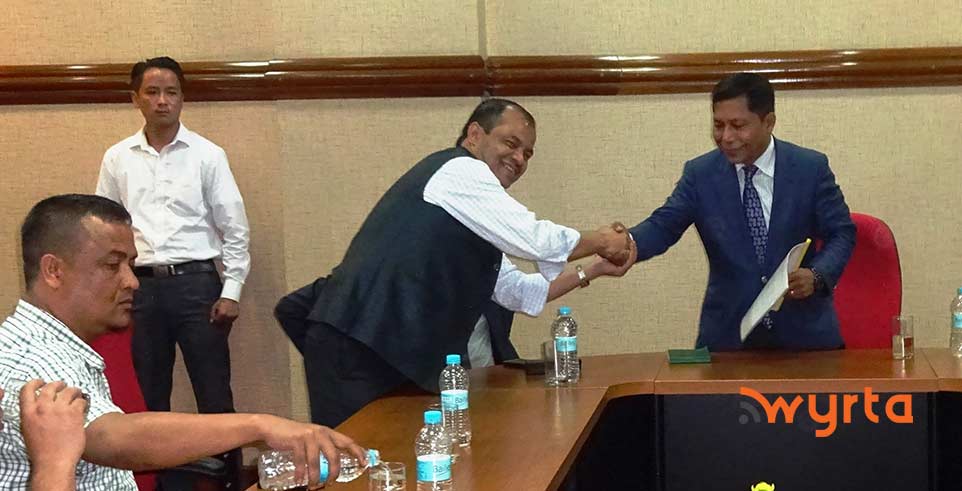 Shillong: Meghalaya Chief Minister Dr. Mukul Sangmatoday  met the members of the KHADC led by the Chief Executive Member Pynshngain Syiem, to discuss the two issues of the Ordinance promulgated by the State Government to empower the traditional institutions and the prevailing enforcement of Building By-laws beyond the Municipality areas.

After listening to the apprehensions apprised by the CEM and other MDCs during the meeting, the Chief Minister explained the circumstances under which the Ordinance was promulgated for the purpose of empowering and involving the traditional institutions in various aspects of governance and delivery system of development programmes. “The intention was neither to infringe upon the domain nor to dilute the role of the District Council, but the State Government had come up with the Ordinance at that point of time based on the circumstances which are well known to everybody”, he said.

“There were some concerted suggestions from the people that the Government must come up with an interim legislative mechanism to give relief under the given circumstances” he recalled.

He informed that the Government had decided not to come up with any regular bill in as far as the Ordinance is concerned and made its stand clear that while doing so it has kept the platform open for engaging in discussions. “After the Ordinance comes to lapse in the event of the Government not introducing a regular bill to replace the ordinance when this Assembly session is over, the discussions will continue whether there will be any perceived need for the State Legislature to come up with any legislative mechanism”, he said, adding, “there should be no room for mistrust as far as the intention of the State Government is only to protect the interest of the people”.

“The responsibility of all the elected representatives of the people is to make laws, whether the law is made by the state government or ADCs is the only issue, but the purpose is the most important part” he added.

Regarding enforcement of Building By-laws to regulate the various constructions in the State, it was discussed that certain records need to be referred to because the whole exercise dates back to decades. “It is the culmination of long drawn exercise of the Government and the records show that it is with the complete involvement of the ADCs which ultimately culminated in those various notifications resulting in MUDA to enforce the provisions of law”, the Chief Minister said in the meeting.

The Law department was asked to share these records with the ADCs so they would be in a position to verify and connect with the past, according to the Chief Minister, and see that all those ultimate legislative measures embarked upon by the State Government were an offshoot of the joint exercise by all concerned, including the State Government and ADCs.

The Chief Minister appealed to all the members of the KHADC to understand that the response of the State Government was based on this whole background and ramifications from the legal perspective and judicial interventions and reiterated the need to act on mutual trust and jointly share the responsibility according to the mandate without diluting the constitution and respond to the challenges of the given situation.(MIPR)